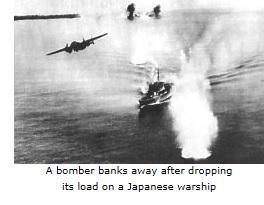 In the first week of March 1943 a force of land-based Australian and American warplanes won one of the most devastating victories of World War II. Described by General Douglas MacArthur as 'the decisive aerial engagement of the war in the Southwest Pacific', the brilliantly planned and conducted Battle of the Bismarck Sea smashed Japanese hopes of regaining the initiative in New Guinea and eliminated any possibility that Australia might be invaded.

The war in the Pacific had started with a stunning series of disasters for the allies: the attack on Pearl Harbor; the fall in rapid succession of Malaya, Rabaul, Singapore, and the Netherlands East Indies; and on 19 February 1942 the low point in Australian military history, the bombing of Darwin. But following those defeats the allies began to claw their way back. The triumph of American naval air power at Coral Sea and Midway in mid-1942 halted the Japanese advance towards New Guinea and Australia; and shortly afterwards the Australian victories (with American assistance) at Milne Bay and Kokoda weakened the enemy's hold on New Guinea. Further successes at Buna, Gona and Sanananda between November 1942 and January 1943 left the Japanese forces in New Guinea in urgent need of reinforcement.

Intercepted radio messages indicated that a powerful enemy convoy was likely to sail from the enemy stronghold at Rabaul with reinforcements for the vital garrison at Lae in late-February. It would be the task of the Royal Australian Air Force and the United States Army Air Force to prevent those reinforcements from reaching their destination. 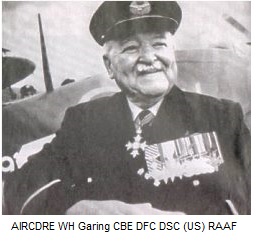 The commander of the Allied Air Forces, the dynamic and innovative General George C. Kenney, began preparing a major assault. He would rely on reconnaissance aircraft to detect the convoy, which would then be attacked by long-range USAAF heavy bombers. Once the enemy convoy was within range of the allies' potent anti-shipping aircraft - RAAF Beaufighters, Bostons and Beauforts, and USAAF Mitchells and Bostons - an all-out attack would be mounted from medium, low and very low altitudes.

RAAF units assigned to the operation came from No. 9 Operational Group headed by Air Commodore Joe Hewitt. Hewitt, however, had only recently assumed command, so the main Australian planning contribution came from his predecessor, the ebullient and aggressive Group Captain W.H. 'Bull' Garing, whose leadership had been crucial to the RAAF's contribution to victory at Milne Bay. This time Garing's expertise in maritime warfare, which he had gained flying Sunderlands with No. 10 Squadron in Europe in 1939-1940, was to prove decisive.

It was Garing who convinced Kenney of the need for a massive, coordinated attack. Garing envisaged large numbers of aircraft striking the convoy from different directions and altitudes, with precise timing. Knowing that inexperienced crews would find the task difficult, Garing suggested to Kenney's forward-echelon commander, General Ennis C. Whitehead, that a full-scale dress rehearsal should be held.

Because allied planners expected the battle to take place in the Huon Gulf they selected Cape Ward Hunt, 140 kilometres to the southeast, as the strike force's rendezvous point. Each formnation would have to overfly Cape Ward Hunt at precisely the right time if the desired degree of concentration were to be achieved. For the dress rehearsal. Garing briefed the crews to rendezvous at Cape Rodney, 140 kilometres southeast of Port Moresby, and to carry out a simulated strike against a wrecked ship in Port Moresby harbour. He and General Whitehead then observed the exercise from a nearby hill.

The dress rehearsal was invaluable as potentially disastrous mistakes were made, with some aircraft arriving over the wreck twenty minutes late. Thorough debriefings were held and the problems resolved. During the waiting period crews honed their bombing and gunnery skills.

Some 6,400 Japanese troops embarked at Rabaul between 23 and 27 February and the convoy of eight merchant ships and eight destroyers sailed just before midnight on the 28th, planning to arrive at Lae on 3 March. Air cover was provided by about 100 fighters flying out of bases in New Ireland,, New Britain and New Guinea.

The convoy was initially favoured by poor weather, which hampered allied reconnaissance. It was not until mid-morning on 2 March that USAAF B-24 Liberators sighted the ships. General Whitehead immediately launched eight B-17s, followed shortly afterwards by twenty more. The B-17s attacked from an altitude of 2000 metres with 450 kilogram demolition bombs. Later in the day another strike was made eleven B-17s whose crews claimed large numbers of hits and reported that vessels were 'burning and exploding.smoking and burning amidships' and 'left sinking'. Up to three merchant ships may have been sunk.

By nightfall the enemy had reached the Vitiaz Strait which meant that in the morning it would be within range of the entire AAF strike force. If the coordinated attack were to succeed the precise location of the convoy had to be known at daybreak; consequently, throughout the night it was tracked by an RAAF Catalina from No. 11 Squadron, which occasionally dropped bombs to keep the Japanese in a state of anxiety. Also during the night eight RAAF Beaufort torpedo bombers from No, 100 Squadron took-off from Milne Bay to use the darkness to their advantage. Heavy weather made navigation hazardous and only two aircraft found the convoy. Neither scored a hit

The moment the AAF had been waiting for came on the morning of 3 March 1943 when the Japanese rounded the Huon Peninsula. For much of the time adverse weather had helped the enemy avoid detection but now clear conditions favoured the allies. Over ninety aircraft took off from Port Moresby and set heading for Cape Ward Hunt. While the strike force was en route, Bostons from No.22 Squadron bombed the airfield at Lae.

By 0930 the AAF formations had assembled over Cape Ward Hunt, and by 10:00 a.m. the Battle of the Bismarck Sea had started. The allies attacked in three waves and from three levels, only seconds apart.

First, thirteen USAAF Flying Fortresses bombed from medium altitude. In addition to the obvious objective of sinking ships, those attacks were intended to disperse the convoy by forcing vessels to break station to avoid being hit.

Second, thirteen RAAF Beaufighters from No. 30 Squadron hit the enemy from very low level, lining up on their targets as the bombs from the Flying Fortresses were exploding. With four cannons in its nose and six machine guns in its wings the Beaufighter was the most heavily armed fighter in the world. The Australians' job was twofold: to suppress anti-aircraft fire; and to kill ships' captains and officers on their bridges.

The Beaufighters initially approached at 150 metres in line astern formation. The pilots then dived to mast-level height, set full power on their engines, changed into line abreast formation, and approached their targets at 420 kilometres an hour. It seems that some of the Japanese captains thought the Beaufighters were going to make a torpedo attack because they altered course to meet the Australians head-on, to present a smaller profile. Instead, they made themselves better targets for strafing. With a slight alteration of heading the Beaufighters were now in a position to rake the ships from bow to stern, which they did, subjecting the enemy to a withering storm of cannon and machine gun fire. According to the official RAAF release, 'enemy crews were slain beside their guns, deck cargo burst into flame, superstructures toppled and burned'.

With the convoy now dispersed and in disarray the third wave of attackers was able to concentrate on sinking ships. Thirteen USAAF B-25 Mitchells made a medium level bombing strike while, simultaneously, a mast-level attack was made by twelve specially modified USAAF B-25C1 Mitchells, known as 'commerce destroyers' because of their heavy armament. The commerce destroyers were devastating, claiming seventeen direct hits. Close behind the Mitchells, USAAF Bostons added more firepower. 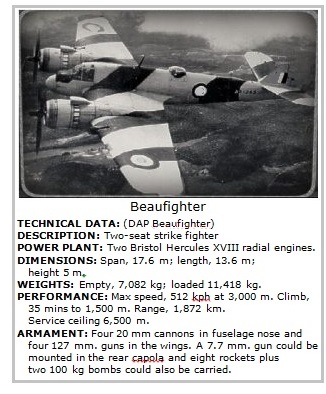 Following the coordinated onslaught, Beaufighters, Mitchells and Bostons intermingled as they swept back and forth over the convoy, strafing and bombing. Within minutes of the opening shots the battle had turned into a rout. At the end of the action 'ships were listing and sinking, their superstructure smashed and blazing, and great clouds of dense black smoke [rose] into a sky where aircraft circled and dived over the confusion they had wrought among what, less than an hour earlier. had been an impressively orderly convoy'.

Above the surface battle twenty-eight USAAF P-38 Lightning fighters provided air defence for the strike force. In their combat with the Zeros which were attempting to protect the convoy three of the Lightnings were shot down, but in turn the American pilots claimed twenty kills. Apart from those three P-38s the only other AAF aircraft lost was a single B-17, shot down by a Zero.

With their armament expended the AAF aircraft returned to Port Moresby. But there was to be no respite for the enemy. Throughout the afternoon the attacks continued. Again, USAAF B- 17s struck from medium level, this time in cooperation with USAAF Mitchells and RAAF Bostons flying at very low level. (The Bostons were led by Squadron Leader C.C. Learmonth, after whom the RAAF's present-day base in northwest Australia is named.) At least twenty direct hits were claimed against the by-now devastated convoy.

That was the last of the coordinated attacks. The victory had been won. For the loss of a handful of aircraft the Allied Air Forces had sunk twelve ships - all eight of the troop transports and four of the eight destroyers - and killed 3,000 enemy soldiers. The brilliantly conceived and executed operation had smashed Japanese hopes of regaining the initiative in New Guinea and eliminated any possibility Australia might be invaded. But there was still a 'terrible yet essential finale' to come. For several days after the battle allied aircrews patrolled the Huon Gulf, searching for and strafing barges and rafts crowded with survivors. It was grim and bloody work which many found nauseating, but as one RAAF Beaufighter pilot said, every enemy they prevented from getting ashore was one less for their Army colleagues to face. And after fifteen months of Japanese brutality, the great immorality, it seemed to them, would have been to have ignored the rights of their soldiers.

In a macabre footnote, two weeks after the tragedy Tokyo announced that all Japanese soldiers were to be taught to swim.

Two controversies clouded the immediate reaction to the battle. First, on 7 March, General MacArthur issued a communique stating that the AAF had destroyed twenty-two ships. Regrettably, at the time, arguments over this exaggerated claim and the precise composition of the Japanese convoy tended to divert attention from the stunning nature of the allies' victory. And second, in another instance of the self-promotion which had become intensely frustrating for the Australians, MacArthur and Kenney sought to claim all the credit for themselves, Kenney's report back to Washington making no mention of the RAAF's participation.

Still, that petty behaviour could not detract from the magnitude of the event. Never again did the Japanese attempt to reinforce their garrisons near Australia in numbers. Their ability to dominate New Guinea, and therefore Australia, had been smashed.

The Battle of the Bismarck Sea stands as one of the most stunning victories won in any theatre in World War 11, and as a crucial episode in the Battle for Australia.

The Author. Dr Alan Stephens is a visiting fellow at the Strategic and Defence Studies Centre, Australian National University. Previously he has been a senior lecturer at the University of New South Wales; a principal research officer in the Australian Federal Parliament; the official historian for the Royal Australian Air Force; and a pilot in the RAAF, where his experience included an appointment commanding an operational squadron.

Please use the controls below to view a presentation by Peter Sweeney RFD from the RUSI of NSW on the battle: